Thirteen is NOT Unlucky

So today (April 30 (yes, the day before my birthday)) marks thirteen years since this wonderful event: 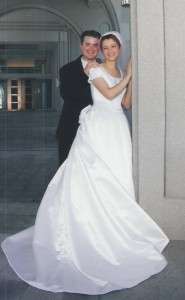 Thanks for the congrats. It’s a real accomplishment, because each day has been very difficult.

The thing is, my life has been exponentially EASIER because Hotness has been my wife for these thirteen years. I have known her now for 14 years and 4 months, give or take a day. I mark the day I met her, January 7, 1997, as the beginning of the happiest period of my life. Why? Because she became my best friend very quickly, and then stayed my best friend while becoming my world.

While recounting my engagement story to a coworker (good gosh, please do NOT ask), I found myself reflecting upon how obvious the hand of God has been in our lives: In getting us together, in getting us married, in guiding our family. She had never intended to come to BYU. Her academic performance in high school had her getting recruiting materials from Ivy League schools and she planned to head east for higher education.

I never intended to go to college. My academic performance had armed forces recruiting me, as well as several schools, but I HATED school.

That all changed for her when she came to Provo in Spring of 1994 for EFY. While in Provo, she felt guided to decide to study at BYU instead of going east.

It changed for me when I came to the MTC in Provo in the SPRING OF 1994 ALSO on my way to serving a mission in Brazil. We can’t be sure, but it’s actually possible we changed our minds during the same week, while temporarily in the same city– several years before we met. While at the MTC learning to preach the Gospel in Portuguese, I fell in love with the Work. I decided I HAD to teach at the MTC. When I asked my teachers there how to go about doing that when I got home, they all said I had to be a BYU student.

Done. Easy decision. That, in fact, was the SOLE reason (in my mind) that I came to Provo in January of 1997. I was hired at the MTC within a week of moving to Provo and starting school.

All this is to say that we cannot deny that God has had a clear hand in our finding each other. He told me when to propose (surprised both Hotness and me) and as we have tried to listen to Him, He has prompted us to make hard decisions that have humbled us and brought us close as a family.

So I have this to say: Thirteen is not unlucky. This thirteenth year of our marriage has been filled with auspicious and wonderful things. First off, I got to spend 365 days (okay, minus that month when they were in Alaska without me) with my best friend. I get to kiss her every day too. Then there was the birth of Walnut. (Call him Wallaby if you like.) Don’t forget that I earned my MA degree as well, along with securing gainful, full-time employment at an excellent company which takes good care of us.

I also finished my third novel, finally stopped focusing needlessly and damagingly on GETTING PUBLISHED NOW and am enjoying a rebirth of my creativity. I’ve lost near 14 pounds, ran 3.5 miles this morning (longest I’ve ever run) (okay, ‘run’ is a relative term, right?), and am finally keeping my voice calm with my kids. I feel closer to Hotness than I ever have before, love her better and more, and cherish the time we get to spend chatting.

This has been a lovely year of being married. It has been the year in which we started really making progress toward some major family goals (mostly because I stopped acting like a spoiled kid).

I have much to be grateful for as we complete our 13th year of wedded bliss. Seriously, it’s bliss. How did I get so lucky? Number one on my list of blessings that I thank Father in Heaven for every night is her. That she is mine and I am hers.