To the Closed Border Jackwagons

First off, I really shouldn’t make an ad hominem attack on people who support closed borders. But right now, I’m deeply upset and I don’t think I can write this without spitting a little.

I am cutting back on my political activism and commentary. There are a couple of things I can’t let slide though. And I fool myself enough to think that people will listen when I have something to say.

I posted an article about the immigrant tragedies happening in Eastern Europe right now, including a devastating photo- you might have already seen it- of a toddler whose drowned body washed up on a Turkey ( I think) shore. One of my dear friends for 20+ years argued with my post. I am going to compile the thoughts I shared with him here in this post. For those who would like the other side, I’ll share his thoughts in bold, followed by what I said.

Here’s the article on AmericaMagazine.org. And here’s the shattering image: 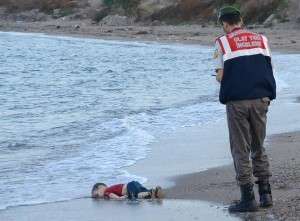 Every time I see it, something in me weeps and fury ignites. This cannot be allowed.

I’m sorry for this. But screw you Donald Trump and all you other closed borders jackwagons. THIS is why you’re wrong. THIS is why we need to make legal immigration easier.

We’re talking about PEOPLE. Yes, I’m shouting. I can’t think of a better thing to shout about.

My friend had this to say:

Absolutely not! My wife immigrated legally as do many others. Living in the U.S. Is NOT a right but an enormous privilege! Illegal immigration is wrong and needs to be stopped. That child is dead due to illegal actions of his guardians. End of story!

He has a point- that child is dead due to illegal actions of his guardians. Saying that’s the end of the story is like saying Harry Potter had one book of 100 pages in its series. I would break any law necessary to keep my family safe from murderous forces. Any law.

Anyway, I said this in reply (I removed his name):

That’s what I’m saying. Of course it isn’t a right to immigrate anywhere. No person anywhere has a right to move to someone else’s property or a right to the service of someone else. Freedom of association and property rights all the way.They want to go to safe places with opportunity. The USA is at the top of that list. So why do we make it so hard for them to come here legally? Why is our immigration process so ridiculously hard, specifically for people who don’t get lucky enough to marry an American citizen? People want to come to the USA because it provides so much good- that’s fantastic. How do you stop illegal immigration? Make the laws clear and enforceable and make it easier for responsible, sincere people to get here legally so they can live productive, industrious lives.

My friend said this:

I can agree with you, but the illegal immigration must be curtailed first

Fine, curtail illegal immigration. How? Build a wall? That is factually stupid. We can curtail illegal immigration by clarifying the laws, removing the stupid ones, and then deploying proper resources to enforce the reasonable laws that remain. After that, what? Deport all the illegals? That is factually impossible. And awful. Of the 11.3 million illegal immigrants in 2012, 8.1 million had or were looking for jobs. They’re productive members of society with families- scrabbling for a better life. In a country that is set upon a hill, a light to the world, where opportunity and upward freedom is real. Starting some non-lethal pogrom to root out all of these people and send them packing is an abomination. And what’s more, it’s counter to our church’s stance- for good reason.Now, deporting those illegals who break the law and are lifetime criminals: committing violent crime and never showing interest in being productive people- they put themselves on the radar and they are probably the ones you want deported. Fine. Simplify that process too. Now back to this child. That’s a three year old child who died, terrified, drowning, and having lost all of his family as a result of evil actions in his homeland. Don’t you think maybe we as a people should be reaching out and lifting up these folks? I understand and accept that people die and it’s tragic. That’s a component of this temporal world.But I do not accept that a bloated government with bloated and ineffectual immigration laws should be given the ability or mandate to go around ruining productive lives and sending people ‘home,’ all while keeping those in deep need away. Screw that.

And then my friend’s argument stopped. He said something kind of silly after and I think he knew that. I’m not going to share that here. I love my friend and respect him greatly. Neither of those feelings changed after this discussion. I think he’s wrong; he thinks I’m wrong. (He is wrong and I am right.)

Do I support amnesty? What does that even mean? We made it so gosh-awful hard to come into this country legally that well-meaning people had to break the law to come here and live productive lives. I think the USA’s laws bear a lot of the blame for that. How dare we say people can’t come here, but then take advantage of their labor and their political leverage? I say we call it even. Let them be. Give them a path to citizenship. Be humane and wise- make good laws and enforce them.

End of story. (But it’s not. Perhaps the USA could also stop going around sowing conflict as we force our way of life down others’ throats. That might help bring peace. I’m not saying it’s all the USA’s fault. It’s patently not. Those who commit genocide and kill innocents are responsible for their actions- from the beginning to the end. The USA is absolutely responsible for an environment that seems to breed these people.)

What do you think? How can we change our laws, specifically, to make things better? What would you do on the USA’s border with Mexico?