Kevin Nielsen is the author of the recently released Sands, published by my publisher, Future House Publishing. 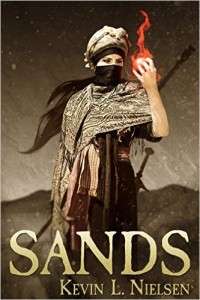 This is a cool book, guys. It reminded me a bit of Dune, but more than that it reminded me of The Blue Sword, which is part of Robin McKinley’s Hero and the Crown series. Also, the world is so tightly realized and textured that it was nearing par with Brandon Sanderson’s world in The Way of Kings.

What I’m saying is that this is well-crafted stuff.

Kevin and I decided to do an interview exchange. He asked me some questions about Beat and I asked him some questions about Sands. I will warn you that this was two authors who love the craft kind of geeking out about stories they love. So this got a little long. That said, there’s great stuff about the craft, from world-building to language and from ideas to execution.

1. Did you find inspiration for the world of Sands from any specific other authors or books?

Most people immediately think of Frank Herbert’s Dune when they think of desert environments. However, I didn’t draw on Dune itself as inspiration, at least not consciously. The novel concept began with the genesauri monsters, which were inspired, in part, by the chitauri in The Avengers movie – the environment then came as a natural consequence of what the genesauri could do and the effects that would have on any climate.  The rest of the world itself came together in pieces, drawing on bits from multiple sources (visits to the aquarium and looking at eels, trips to the Museum of Natural History at Thanksgiving Point to look at the model I used for the marsaisi, living through sandstorms in Arizona when I was younger, etc), but mostly as answers to questions I’d ask myself regarding consequences of previous decisions I’d made about the world. That’s usually how a world builds for me, a concept and then pondering the consequences of that concept until a world or setting unfolds.

There were some rules, though they are loose.  Sands is the first book in a series wherein the past history of the world itself unfolds slowly within each book.  Many of the names (think the extra “h” in some names or the “shufari” term) derive from some language systems of the past which have been mostly forgotten over the centuries.  Some of the linguistics are based loosely off Portuguese, which I speak fluently, so I did pull from modern linguistics as well, just not English.

Language is a living thing, so not all the names and terms follow the same linguistic pattern (or any linguistic pattern) as those descending from past cultural laws because the language has evolved and is evolving.  So, yes and no.  Some of the origins of the language(s) gets explained and/or heavily implied through the rest of the series.

3. Your perspective and dialogue are really tightly crafted, with oaths and comparisons drawn from a richly textured world. Things like, “Trust is more precious than water,” for example. What was your process to honing this story so it was so tight like this?

World-building is where I start when I craft my stories.  I have notebooks I carry with me at all times in which I outline my ideas for world-building concepts. Once I have a few concepts mulling around in my head or noted in my main little notebook, I jot them down in another notebook (by hand) and flesh them out some more.

Those concepts and ideas take even more shape as I write and sometimes seem to simply come as a direct result of exploring the world through the eyes of each character.  Each point of view reveals a new facet of the world in ways I may not have thought about before.  This is one of the reasons why there are multiple POV characters in Sands.

A lot of the dialogue and “oath” tightness also comes from a speech by Richard Feynmann called, “There’s Plenty of Room at the Bottom.”  Though the speech itself has nothing to do with writing, it reminds me that a story is in the details, in the little things that make up “the bottom.”  For me, the tightness in language and dialogue are what make up the world.  The sand, the monsters, etc, those are the big things, but the language and the in-world references, the names, even the expressions (like the specific passage you quoted), are what make up the feeling and the texture of the world.  It shows how the characters within the world perceive it, which gives the world a sense of character in and of itself.  You can learn a lot about a culture by how they speak and especially how they “fake swear.”

4. I’m assuming Sands is the first in a series. Would you characterize it as epic fantasy? If so, what kind of promises does epic fantasy make to its readers and fans?

Yes, I would characterize Sands as epic fantasy.  More precisely, I would probably call it introductory epic fantasy.  It is the first book in a series, which is currently planned out to be five books altogether. Epic fantasy does come with some inherent promises, the first of which is an unspoken agreement to provide internal resolution within each installment in the series as well as resolution in the series as a whole.  This creates some challenges, but I’ll address those more in the next question.  Another one of the promises is that all the various storylines (since there are usually several) will come together at some point and relate to one another.  This creates a third major promise to the readers and fans, that there will be some measure of suspense to the novel, some puzzles to be figured out for which clues and breadcrumbs will be left throughout the story.  In my own series, there is a fourth promise, a promise that the story will grow more complex as it progresses through each installment so that the final resolution will have greater resonance.

5. Along the same lines as #4: What challenges do you think are unique to epic fantasy? Any advice for a writer trying to find her or his way through the first in their epic fantasy project?

Epic Fantasy has one major pitfall which comes from the series aspect of the majority of epic fantasies.  Continuity and consistency.  I put the two of these together since they are inseparable in epic fantasy.  As part of the promise of epic fantasy there comes the understanding that the overarching plot will stretch from the first book to the last, but will also have an internal plot unique to the particular installment (book 1, book 2, etc) which will garner resolution at the end of each unique book.

This relates to my main piece of advice for a writer who wants to wet their toes in epic fantasy.  As much as I am not a very good outliner, epic fantasy needs some measure of cohesion and consistency.  If you don’t outline, this will mean a LOT of revisions to get the consistency correct and the plot to work.  However, something that is a MUST is an “in-world” encyclopedia of terms, phrases, expression, etc, including their origin and any deeper context to them that may come up in later books in the series.  Craft a world rich enough to have its own problems and the story will evolve consistently because it will behave consistently.  If you craft an arrogant character well enough, you’re not surprised when that character reveals their arrogance through their actions even when you’re not specifically trying to make them do arrogant things – it is simply a part of their nature – the character has a life of its own.  In the same vein, if you construct an internally consistent world, you’re not surprised when the world continues to reveal awesome, consistent bits of information about itself throughout your story even when you’re not specifically trying to doing additional world-building – it is simply a part of its nature – the world has a life of its own.

If you made it this far, awesome. Now go buy his book! Also, you can find his interview of me here.