Coolest Science Experiment With an Egg

Our firstborn, lovingly nicknamed T-Rock, suggested the other day that we do an experiment with an egg and vinegar.

So I grabbed one of our fresh eggs, only recently produced from the butt of one of our chickens, and he grabbed a pint mason jar. We put the egg in carefully, with a spoon, so as to not crack it. Then we poured apple cider vinegar.

T-Rock said that he’d heard the egg shell might dissolve. I got curious so I watched it closely.

After 24 hours, things had gotten pretty interesting, so I took a couple of pictures. This one’s a side view. The egg started dark brown. The froth started forming only a few minutes after immersing the egg. The brown stuff is the skin of the eggshell. It has softened, mostly dissolved, and there is a little bit of it gathered on top. 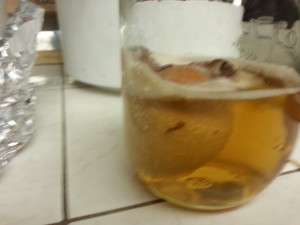 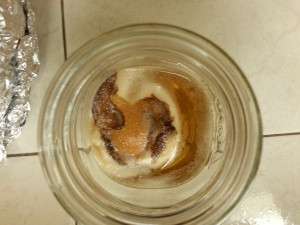 We let it go for another 48 hours. The skin completely dissolved and it.. well, pictures and video ought to get this done.

Here’s the egg pictured next to an egg that is exactly the same size that our test egg was. So you have a test and a control egg. Test egg is on the right. 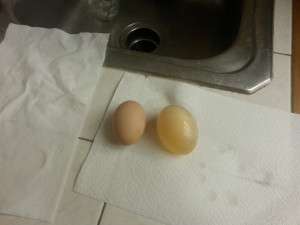 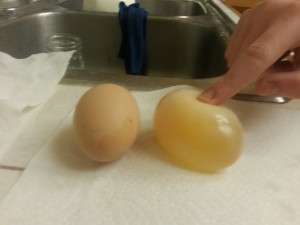 The shell has completely dissolved, leaving only what appears to be a slightly tougher membrane. And it’s definitely larger than it was prior to the experiment’s start.

We fiddle with the nifty test egg here:

And here, the egg meets its doom:

So, as you saw, the egg burst easily when punctured, and the white was really runny. The membrane was all that remained.